Home Technology DGII Stock: How Digi Became a Player in the Internet of Things

With the help of some acquisitions, Digi international (DGII) aims to become a major player in the Industrial Internet of Things. It seems that DGII equity investors are closing in on this view.

So now, the Minnesota-based company may be able to put the state — once home to computer industry icons like Control Data, Univac and Cray Research — back on the high-tech map alongside California or Texas.


Formed in 1985, before the birth of the Internet, the company went public in 1989. In the beginning, the company sold Digiboards, serial port expansion cards for personal computers or for connecting PCs to multiple peripheral devices.

During the dot.com boom of the late 1990s, DGII stock posted some modest gains as most of the tech companies flourished. So investors forgot about Digi stock for about two decades. 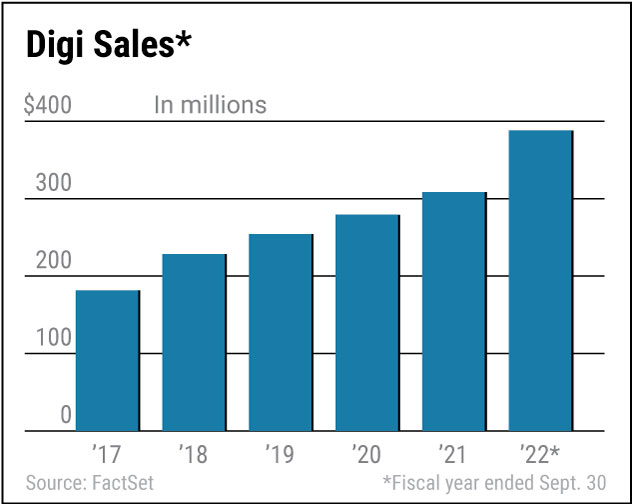 Additionally, the acquisitions of Opengear, Haxiot, Ctek and Ventus Holdings since 2019 have transformed Digi into an end-to-end solution provider for the Industrial Internet of Things. It sells data collection sensors, network routers and gateways, and software. Additionally, the Ventus deal made Digi a managed IoT service provider.

“Diversity, I think, has proven to be a really nice asset for us,” Digi CEO Ronald Konezny said on the company’s September quarter earnings call. He took over as CEO of Digi in 2014. 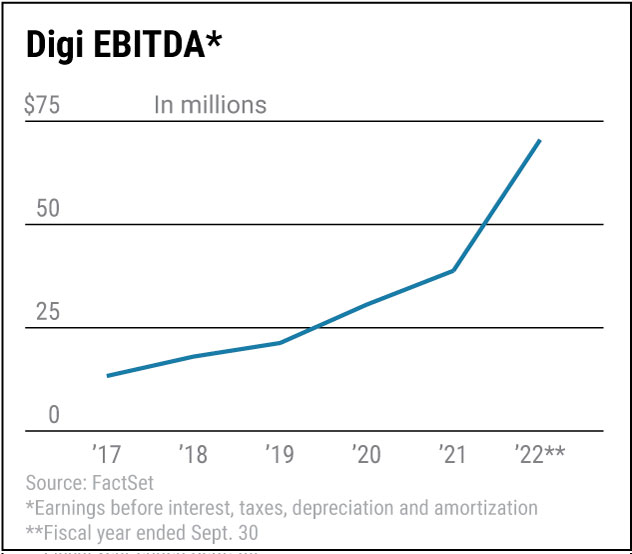 In the June and September quarters, Digi achieved one goal: exceeding $100 million in quarterly revenue. Additionally, it finished fiscal 2022 with $94 million in annual recurring revenue, or ARR. Now, Digi is expected to exceed $100 million in ARR starting in fiscal 2023.

The company now gets 24% of its total revenue from ARR subscription services, up from 4% five years earlier. 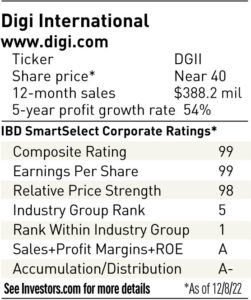 To Piper Sandler, analyst Harsh Kumar said in a statement, “Digi has built a strong, sustainable, high-growth ARR business over the past few years.”

Digi’s third goal is to acquire more than $100 million in annual Adjusted EBITDA. But it finished fiscal 2022 with $70 million.

Including Ventus, the company gets approximately 25% of its revenue from high-margin software-based IoT solution services.

“Management has a strong focus on the ARR,” the DGII stock analyst said in his note. “The goal is to combine existing ARR growth with profitable growth organically and/or through acquisitions. Management has clarified that future acquisitions must have a high ARR angle to qualify for a first look.”

In its fiscal fourth quarter, Digi posted adjusted earnings growth of 80% year over year at 45 cents a share. Additionally, revenue increased 34% to $105.7 million. Its results beat analyst estimates by 41 cents of earnings per share on $100.4 million in revenue.

For fiscal 2023, Digi expects revenue growth of 10% due to continued supply chain constraints.

Edge Computing to power the IoT

Additionally, 5G networks improve latency, the time it takes for networks to respond. Analysts expect a synergy between 5G networks and edge computing, the next generation of cloud computing.

Edge computing implements data processing, storage and networking near sensors and where other data originates. The goal is to process and analyze data locally in real time rather than sending it to distant data centers in the internet cloud.